We’ve been accumulating gear to do small scale – think jewelry – metal pours, including a little electric casting furnace ordinarily used for making bullets, a larger propane-fired casting furnace, and all the crucibles, stirring implements, ingot makers, casting ladles, and other miscellaneous items to make the process work. This afternoon, I decided to try my hand at using the laser cutter to create forms into which to pour pewter, which is relatively inexpensive and melts at low temperatures. The idea was to create a pewter version of Nova, our space bunny mascot. I prepared the outline by adding a sprue (for pouring the metal)… 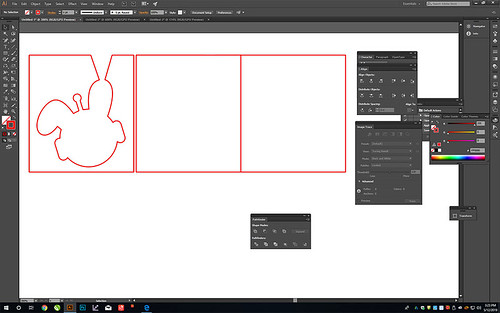 …and cutting the outline (plus pieces for the front and back) from ~1/4″ hobby plywood using the laser cutter.

I read somewhere that a little carbon on the surfaces of the mold would make the metal release more easily, so I blackened the insides of the pieces that would form the outsides of mold, using a propane torch.

I needed to get the pewter melting, and placed it into the casting furnace, helping it along with butane torch, which I also used during the process to heat the carbon stirring rod and ladle before using them.

The metal ready, I clamped the pieces of the form together, placed the form on a firebrick, and poured the pewter, using a cast iron ladle.

I over poured some, and put a little more in when I saw a bubble pop up, but the leftovers were easily reincorporated into the pot. A couple of minutes later, and the form was cool enough to crack open.

The outside pieces separated just fine, but the metal didn’t want to be freed from the wood, so I ended up breaking apart the form.

I used a file to remove the sprue leftovers, and (after taking this picture) polished using steel wool. I like the rustic surface, and how the metal picked up the grain of the plywood. It looks very handmade.

I was truly surprised at how simple the whole process seemed, and I have lots of ideas about using raster engraves on the front and back pieces to create detail, and about milling graphite using one of the CNC machines to create more durable forms for a series of limited edition coins we’d like to produce to give to special guests and supporters.

END_OF_DOCUMENT_TOKEN_TO_BE_REPLACED

As people enter our space, we’re looking to find ways to communicate answers to the questions “Who belongs here?” and …